July 30, 2010
This post is straight up, just the facts and site seeing.  Nothing exciting.  But for me, it was the highlight of our trip. Our second day, we drove from Rochester to Palmyra, and I found myself wanting to house hunt in that cute, quaint, little town.  Between the old brick houses, the sprawling yards with huge trees, I fell in love.  And regrettably, I didn't take any pictures of that part of town. 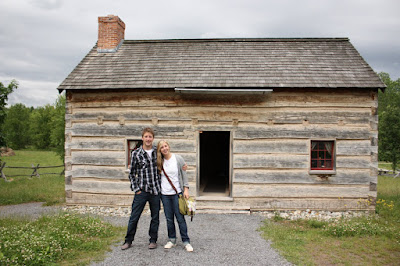 We started our tour at the Smith Family farm. 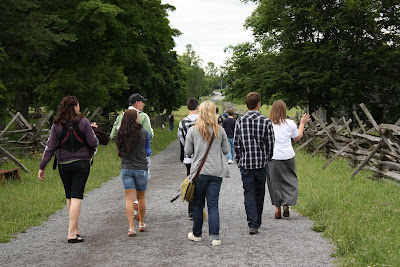 This used to be the road that was actually used to drive through town.  On the right side is the Smith family house, and Sacred Grove, and on the left is Alvin Smith's house.  The Church eventually created a new paved road.  It is crazy to me that just 20 years ago, people were driving right through the property. 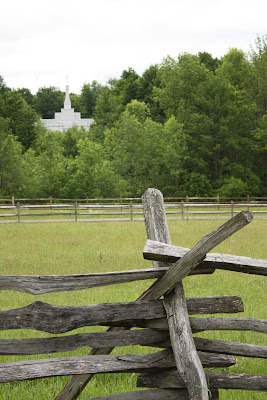 The Palmyra Temple built just across the street from the Smith Family property.  The story is told that after the temple was built, President Hinckley wanted to trim the trees so that you could see the Sacred Grove from the temple window.  This is the only clear window in any of the temples.  The city denied his request.  But soon after, a storm came through town, and just happened to clear away the branches and trees to allow the view from the temple window. 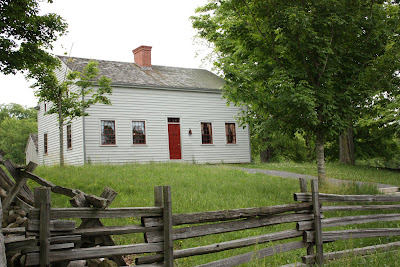 Alvin Smith's house.  He was the oldest of the Smith brothers.  This house was a mansion compared to the small Smith family home.  It had been bought and sold through the years. The church eventually reclaimed it, and recently stripped away the additions restoring it to it's original state. 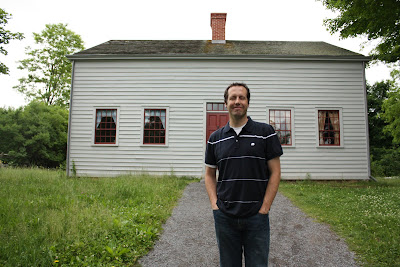 Aaron took a picture in front of this house when he was on his mission.  I need to find it to compare. 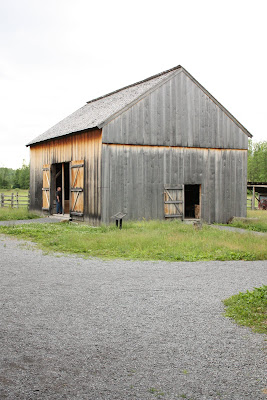 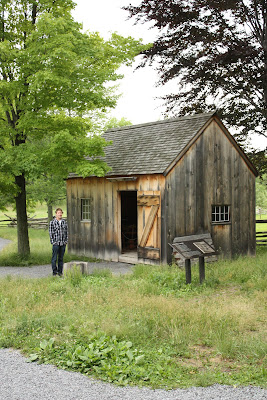 Parker in front of the cooper's shed. 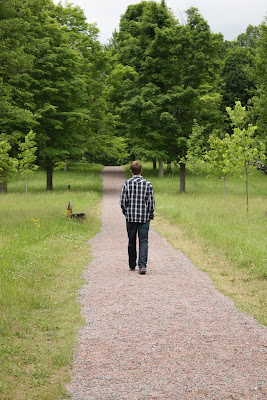 The pathway to the Sacred Grove.  It was more beautiful than I expected.  It lies just behind the Smith house- incredible that such a beautiful place of peace and refuge was in their backyard. 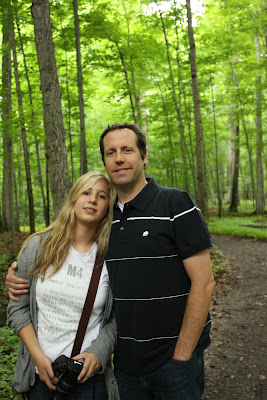 One of my favorite pictures from our trip.  Maddy and Aaron. Sacred Grove.  Special. 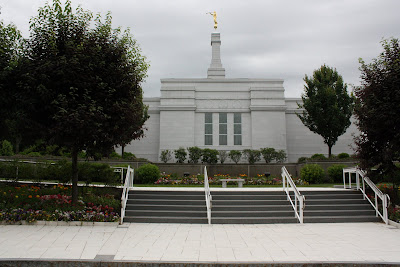 We drove by the temple on our way to the Hill Cummorah.  It was tiny- maybe as big as a church building, but smaller than a Stake Center. 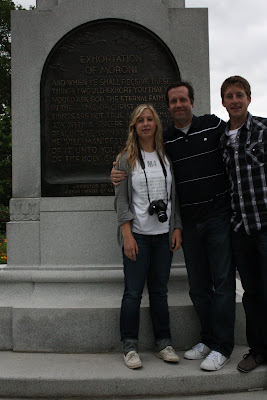 Maddy, Aaron, and Parker at the Hill Cummorah Monument. 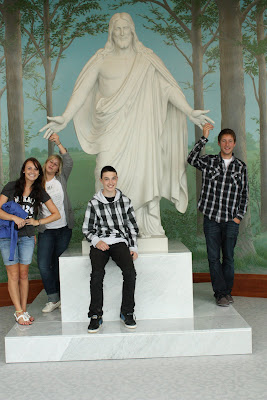 At the Visitor's Center at the Hill Cummorah, where we happened to run into Aaron's mission president's younger brother, who was serving a mission with his wife. Small world. 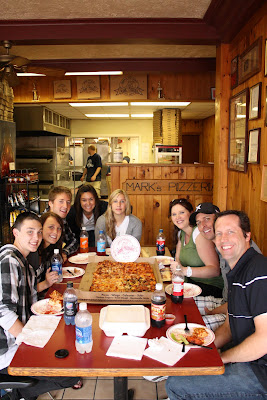 The Urban Spoon app, care of my phone, suggested Mark's Pizzeria, and we were in heaven.  The cheese bread was to die for! 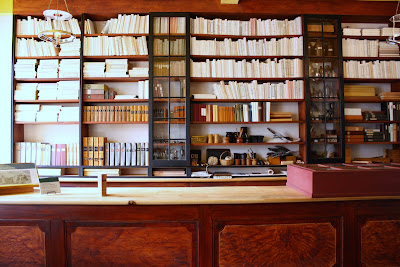 The EB Grandin Building was also incredible. This is where the first Books of Mormon were published.
A: it is incredible what went into making a book back in those days.
And 2- it is an amazing story.  They still have the original ink splattered on the walls, and the original wood floors. The towns people would often meet in this building to talk about the latest goings on, or to play games and read books. 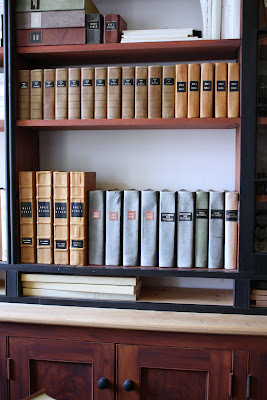 I wanted those books, and the book shelves. 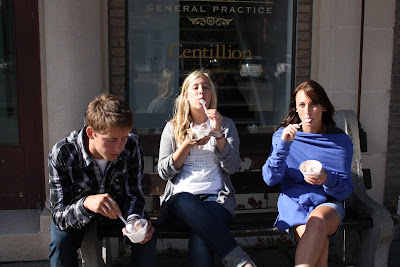 After that, we got some ice cream.  Parker, Maddy, and Kaylie. 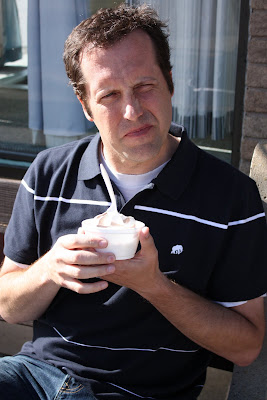 And Aaron makes the best faces. 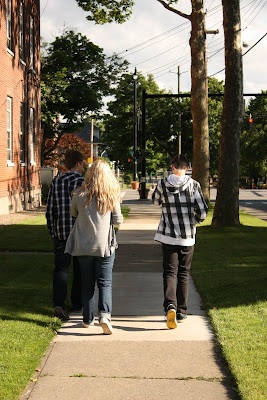 We walked down the street to see Alvin's grave.   He is the only one in his family buried there. 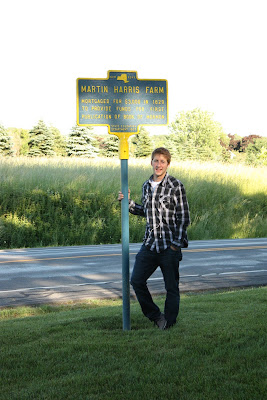 Then to the Martin Harris farm.  There wasn't much here- a house and property.  The house wasn't the original, and they don't give tours.  So we took a picture of Parker and the sign. But the couple here told us about a fireside that night at the Peter Whitmer farm.  So we drove about 15 minutes to Fayette. 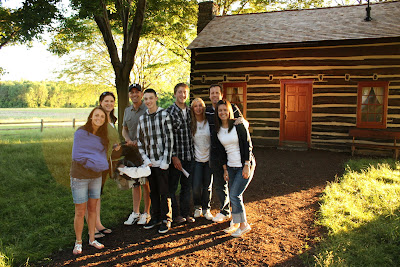 We arrived to find out that the fireside had been canceled.  And the cute, little missionary couple was locking up the building.  They were nice enough to let us in, and give us the tour anyway.  Once we stepped inside the chapel, Aaron realized it was the building he had been in when he conducted a missionary conference while on his mission.  President Hinckley was presiding, and Aaron was able to sit next to him.  They also let us walk through the Peter Whitmer home.

And there you have it. Our church history tour in a big nutshell.  By far my favorite part of our entire trip.  So worth it!

Alifinale said…
I love that you took so many pictures because I so would love to go there and I just pretended while I looked at your pics. Looks like such an amazing trip.
8/2/10, 9:25 AM

Stephanie said…
Yay! I finally sat down and read your blog! What a fun trip. So jealous. Someday I want to go there. Dave got to go when he played Alvin... ahhhh someday.

brooke said…
I love that picture of Maddie and Aaron in the Sacred grove. She looks beautiful and I love the story about Pres. Hinkley and the storm. You don't mess with Pres. Hinkley.
1/19/11, 10:37 PM

Anonymous said…
You can save your precious time to research for grants as we can identify the correct opportunity and prepare the application accurately to have sufficient funds to complete your project.