The Love Story of Aaron & Mandee 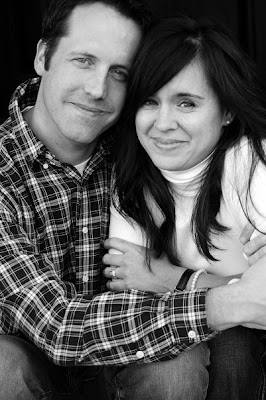 (2007)
This month we will celebrate 9 years of happy marriage.  I love that we got married on the last day of May because it leaves me all month long to think about why I love Aaron.  He is honestly the best thing that ever happened to me.
Since his birthday is at the end of the month as well, I've decided to celebrate him and his awesomeness for the next two weeks- on the blog, and at home.
This was a post from the old blog- and one of my favorites.  I begged Aaron to play along, and he did, which was painful for him. But I will forever be grateful because his answers make me laugh every time I read them.
So without further adieu, I give a reprisal of:
The HE SAID, SHE SAID version of The Love Story of Aaron and Mandee


2. What was the first thing you said to your wife/husband?
He Said: Have you ever seen a dancers body before? It's ok, drink it in.
She Said: I like your Tiva's. Actually, I have no idea what I said to him.

3. Where was your first date?
He Said: I invited myself to join her and her friend on a trip to Harry O's in Park City
She Said: We went to Harry O's (a dance club in Park City) the night after we met, but I don't count that as a date. But I don't remember what our first "official" date was. Once, we hit golf balls and ate at Macaroni Grill. That was fun.


4. Where was your first kiss?
He Said: On the couch in her condo. Something we will both remember forever.
She Said: I don't remember, but Aaron said it was on the couch in my condo.

5. Did you have a long or short engagement/courtship?
He Said: I would say long to really long. It was pretty much just like the show "The Courtship of Eddy's Father", except I didn't have a kid named Eddy.
She Said: We dated for 1 year non-seriously. 7 months seriously. And we were engaged for 4.5 months.


6. Where did you get engaged?
He Said: I don't remember, but she swears it was in my condo.
She Said: In his condo... it's a long, but kind of cute story better saved for another day.


7.Where did you get married?He Said: Mount Timpanogos Utah Temple
She Said: The Mt. Timpanogos Temple in American Fork, Utah

8. How did the reception go?He Said: Much better than I though it would.
She Said: We didn't have one since it was Aaron's 2nd marriage, and anyone who really cared that I was FINALLY getting married (at 26) lived in Bakersfield. We had a beautiful luncheon at the Alpine Art Center. And really, if I had to do it all over again, I would do it all different. And I'm sure that surprises no one.

9. How was the honeymoon?He Said: Pretty good considering the word honeymoon has its roots in the Norse word "hjunottsmanathr" which was anything but blissful. Northern European history describes the abduction of a bride from neighboring village. It was imperative, that the abductor, the husband to be, take his bride to be into hiding for period of time. His friends assured his and her safe keeping and kept their whereabouts unknown. Once the bride's family gave up their search, the bride groom returned to his people.

Her family gave up after one day, and I returned to my people.
She Said: Awkward. Ha ha. But seriously. We got married on a Thursday, and spent the weekend at Deer Valley in Park City (it was gorgeous). We didn't want to go very far because we had so many family and friends who came in from out of town. And it just didn't seem right to leave town, when those people whom we love and spend so much time missing, just got there. So we hung out with family, slept in Park City, and went to our new ward on Sunday.

"Hi, we're the Grants. We just got married on Thursday and our neighbors, the Romines, are so relieved that we finally tied the knot, since the realtor told them when we bought our house 6 weeks earlier that we were just planning on living together."
And those are the first 2+ years of Aaron and Mandee. And we still love each other. A lot. A LOT, a lot.

And 3 years after that, we still love each other, a  LOT, a lot.  So here's to celebrating him for the next two weeks.  Even though he deserves to be celebrated every day.  (I should probably put that on my daily to-do list.)


I love you,  Aaron-
Mandee

Likely said…
I remember this post! So cute. Happy Anniversary! So glad you two cheated to get into that dance!

brooke said…
I saw the title of this post and got giddy. I guess I live vicariously through the two of you. I remember this post too and reread it with the same zeal as I did the first time. It is hilarious. I love that the realtor told the Romines you two were just planning to shack up for awhile. Classic.

Neva said…
I agree, Aaron IS the best thing that ever happen to you and you to him. I love the memory of your wedding even though I was sick with Valley Fever again so wasn't so festive, sorry. It was a fun time for all of us and has been ever since.Love you ALL!
Mom
5/16/10, 5:03 PM