The Way It Is 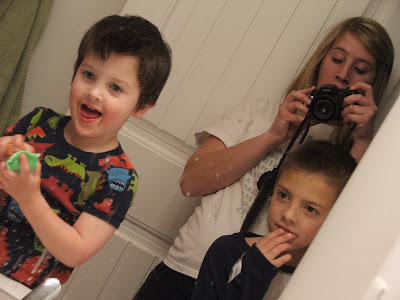 -someone needs to clean that mirror-
Life is busy, and our kids are awesome and crazy, and I don't want to forget life, the way it is, right now.  So, we'll start with ...

Parker:  Is almost finished with his second semester of college.  Which he paid all on his own.  He's still working at Kneaders (everyone's favorite Kneaders boy), going to school, and helping his (real) mom with her boys.  Oh, and he managed to get his Eagle Project finished in the nick of time- without any help or pressure from us.  One of our proudest moments!  Last Sunday, I walked into Sacrament Meeting to see him sitting on the stand to bless the Sacrament.  I immediately welled up with tears- I felt so proud of him.  This boy has been so good lately.  He makes us laugh, is mostly nice to his siblings, and has good friends.  Love him!

Maddy:  Working hard to keep her grades up- close to a 4.0.  Since college is just around the corner for her, "we" are busy making sure she doesn't miss any requirements, test dates, etc.  She loves her friends and loves taking silly pictures with anyone who will join her.  She prefers sweats over "outfits", and enjoys a good television show while knitting away (thanks Aunt Kelly).  I occasionally find her at the sewing machine working on little projects. I love this girl.  I love that she doesn't care if she looks like the rest, or dresses like the rest, and that she doesn't care about the in crowd.  She is her own happy person!  That same last Sunday, Maddy spoke in church on Faith in Jesus Christ- aside from Aaron finding a story for her to use in her talk, she wrote it all on her own.  And we were so proud!  Seriously, I have never cried so many happy tears in one Sunday.  She recently completed her Young Women Personal Progress program, which is the equivalent of an Eagle Project for girls.  And she is the best daughter in the world!

Maxwell:  Such a good boy.  Getting old and big.  He is tall, and loves to be outside with friends.  We live in Boy-Ville (as one of my neighbors called it) so there is no shortage of friends to play in the dirt with.  He is playing soccer and baseball right now, and loves both sports.  But if you ask him, his favorite sport is golf- which he rarely plays.  He loves to practice piano and I love to hear him play.  He gets 100% on his spelling tests, loves to read, and is a good boy in class.  I help in his classroom on Wednesdays- before I leave, I always try to give him a kiss, and he always turns his cheek to me, a little bit embarrassed.  I love this little boy.

Charlie:  My little turd child.  Also known as Awesome.  This kid has the McCaleb temper and I am trying to break him of it.  I told Aaron a few weeks ago that I feel like he's a bad boyfriend that screams at me one minute, and 5 minutes later gives me a big hug and kiss and tells me how much he loves me.  Needless to say, Charlie requires a large dose of parenting and one on one time.  Charlie does not like soccer- and to watch him is like watching Pee Wee Herman running down the soccer field.  SO cute.  And so funny.  Charlie does like t-ball.  And he's teaching himself to read.  He will bring books to me, and ask if he can read them.  At first he would name each letter, then he started blending sounds ... and now he is sounding out words.  All on his own.  And he wants to sleep with the books.  Which is fine with me.

Jack:  My crazy baby that isn't a baby, but I will always call my baby.  He's potty trained!  Except that he's had two accidents- not at home, so I'm blaming those on the "he didn't know where the bathroom was" excuse.  He loves to wear masks- sometimes Spider Man, but mostly Batman.  And depending on what we are doing or where we are going, it's a different Batman.  Last weekend while we were working in the yard, he was Dirt Batman.  Before church, he was Church Batman.  At dinner time, he is Dinner Batman.  He has an imaginary friend named "Lightening", and today he was hell bent on showing me where he lived.  So we drove to the next neighborhood over, and he picked out a house that has stairs that go "down up side to side".  (We don't know what that means, either.)  We wonder if Lightening knows Gaba-jean, who was Max's imaginary friend.  Jack refers to the dark as "pinch black", and stutters when he begins his sentence with "I ..."

Our pediatrician says not to worry, so we aren't.  Oh and he LOVES puzzles.  The little boys all do.  It's their latest obsession.  We are going through a puzzle phase.  And a Lemon Squishy phase.  (Ask Aaron.)

I am at a place in life that seemed so far away just 2 years ago.  It's official.  We have big kids.

p.s. After watching Dan In Real Life last night, I realized that I am married to "Dan", in real life.  (Except that Aaron would never do that to his brother.)  Love that movie, and LOVE my Aaron.

brooke said…
I love updates like this. I love hearing what everyone is doing (but I need more on Aaron and Mandee!)

grandma jojo said…
thanks for the update. i LOVE hearing about you guys. glad things are happy most of the time!!!!
Dan In Real Life - one of my favorite movies.
love love love all of you.
4/20/10, 2:29 PM

Neva said…
Your post makes me realize how much I miss my boys and your family! I love reading about all the kids and how big they are getting even though I wish they wouldn't grow up. Give them all a kiss ftom Granny and tell them I love them from here to past the sky and back 10 times.
4/21/10, 12:21 AM

Aaron and I joke every time we are in that store that it smells like a fart. But it's really not very funny, because it does smell like someone tooted. In every Walmart I've been in, I've smelled someone's stink. It makes me want to puke. But I go back because it's cheap- I am always able to get all of my groceries and then some for around $100. And I can also grab some fabric, tires, and plants for my yard while I'm grocery shopping.

Saturday night, Maddy and I made a late night dash to Walmart. I needed groceries, and she needed some material to make a pillow in one of her classes at school. The first thing I went to put in my shopping cart was french bread. No french bread. None. Anywhere. I didn't even necessarily need the fresh stuff. I would've taken the stuff in the plastic bag with the twist tie, but they didn't even have that. Second on my list- tator tots. (I've heard from a million people that a ce…
16 comments
Read more