April 29, 2010
Jack gave his first talk in Primary last Sunday.  I asked Aaron if I could video tape it at church, but he said that would be tacky.  So we video'd him later at home.  It's 4 minutes of complete family chaos, just know that it went off without a hitch in Primary.

1- The "other people" that Jack refers to- during singing time, the chorister had kids help her hold up pictures while they were singing.  Jack felt strongly that he needed "other people" to help him hold his pictures.

2-  I already know that I sound like a mean mom when I'm telling Jack to leave his jacket alone.  But I wasn't trying to be mean- and I didn't feel mean when I said it.

3- I can't figure out how to edit the video, so there are 2 minutes of typical Grant family chaos at the end.  But make sure you tell Aaron what a great voice he has.


More fun in Primary-  Max was also spotlighted in Sr. Primary.  He filled this paper out himself at an activity  in January. 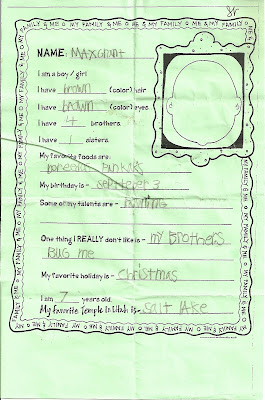 My favorite parts are;

"Some of my talents are-"  bowling  (we never go bowling)
"One thing I really don't like is-"  my brothers bug me  (yet, another proud moment)
and his birthday is wrong.

grandma jojo said…
love your talk Jack. good job! i'm glad you had the other people to help you out.
the girls and i think we figured out what Max's favorite foods are;
burritos & pancakes?
tell him he will be eight soon enough - let's not rush it!
4/29/10, 4:53 PM

Heather said…
I think Aaron could be the primary chorister...or even the primary president! He would be great at doing sharing time and singing time!Cute video!
4/30/10, 10:33 AM

Neva said…
Loved your singing voice Aaron, you're such a good dad! Max did a very good job filling out his paper I loved reading every word. So funny his birthday is wrong, I miss my little buddy, :( and his brothers.
love you all
4/30/10, 10:52 AM

Stephanie said…
Love it! Hilarious! Thank you for letting me back into your world.