When He Was 23 Months 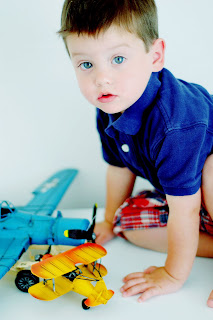 I made the executive decision to lose the bottle on our vacation. My fat baby is almost two, which means he's not so much a baby anymore. And on our summer vacation, he turned into a toddler. Sad days for me. I totally understand how the baby of the family stays the baby of the family. Because in my own little mom world... I want him to stay my baby forever.
In our family, we usually have The Terrible Threes. I think Jack is doomed to just be terrible. While he's been a really good baby, he's also been a monster. Monster. Not only does he get into stuff, but he destroys the stuff he gets into.

A few weeks ago, he turned the bath water on, and then chucked everything within reach into the bath tub; his Thomas The Train toy laptop, a Nintendo DS, my bottle of Lovely perfume, contacts, my eye glasses, a towel, and a new bottle of baby bath soap.
In one day, he managed to break both the Wii and the Xbox.
He dumped his apple juice all over himself while watching TV on Aunt Abby's guest bed.
He put the dog food in the dog's water, and then dumped the dog's water on the floor.
He ran full force (via chubby legs, but still...) for the swimming pool- which didn't ruin anything but gave us a heart attack.
o=888888888888 (that was him)
On our trip we affectionately called him "Ric" which was short for ricochet, since he was bouncing off the walls.
He smuggled the Mac mouse outside and chucked it off the deck.
And he punches. He makes a fist, throws it at your face, and says "punch". Who taught him that?
But the sad part is not all of the destruction he has caused in the last few weeks, it's that he's growing up. He's getting big. He's talking more. He says "cause" when you ask him a question. He says "yeah" when he wants something. He says "k" when you ask him to do something. And he calls me "mean" when I take anything of value that he could potentially destroy or chuck away from his chubby, little hands.

But he also folds his hands when it's time for prayer and will say "ba-ba... mama... men" which interpreted means "bless my bottle and my mom... Amen".
And he likes to snuggle with me in my bed and watch "choo-choo's" or "cars".
He says ink (drink), ganky (blanket), nigh-nigh (bedtime), mean, tee- too (thank you), shoes, jewsh (juice), show, teat (treat), cookie, boe boes (bubbas/the brothers), Chars (Charlie), sissy, mama, dada, and most importantly- MINE.
He tries to jump. He loves to run. And he loves to be outside. He loves water- the hose, sprinklers, kiddie pools, big pools, and bath time. He loves long walks on Sundays, and enjoys having his hair styled with gel. And making monster noises.
So, my baby is almost not a baby anymore. He's turning into a little boy, and he might end up being a naughty one. But like my Gramma and Mariah Carey say... he'll/you'll always be my baby.
photo by: KM

Abby said…
You just quoted Mariah Carey! What am I going to do with you?!

I love the chub monster! He's crazy and so cutie!

Amy Coontz said…
Three's are so much worse than twos. I think it's because they KNOW they are dong wrong, and do it anyways.

Laura and the family said…
Often where his trait got that from? My boys got it from both of us.

Ryan colored all over my computer tower with blue markers.

Dylan stole all of our return address sticker and placed it all over him.

Let Cathy tell you what David did with his eggs when he was five.

Me?? I put markers on my parent's high school face. Sad, huh? (Advice: You'd better put it up on a high place.)

grandma jojo said…
love my jack jack. sorry there were no choo choo videos while you were here. next time! fyi: he also says jo jo - gotta love that (i do)! i can't believe he is almost two. time is moving much too quickly for me.
7/15/08, 12:07 PM

traci said…
My goodness are you sure you are talking about your baby and not mine? That is Gage to a T. Sometimes I look at him like he is a monster - the older boys in the neighborhood tattle on him because he punches and leg sweeps them- and then late at night he is the sweetest, funniest little boy. So snuggly. He has two pillowcases instead of a blankie and sucks his middle fingers. I think your sweet baby would get a long great with my sweet Gage. I love reading about your great, yet real family!
7/17/08, 9:47 AM