February 11, 2007
Had I known what I was getting myself into, I still would've married him. He's that wonderful, and so are they. But, I would've read more books and started taking Prozac a lot sooner! (Kidding, kind of.) 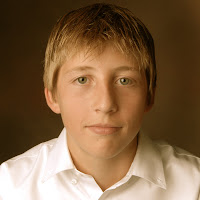 Parker vs. Stepmom. When we have our issues, it is often when I am enforcing my role as "mom of the house". But when I am just Mandee, things are pretty good. He is such a good boy, and we hear it often from other people (mostly at church, and parents of his friends). I feel like since I am the stepmom, I can agree with their complement. Yes, he is a really good kid. He tries really hard in his school work. He is an awesome soccer player. He is a natural leader among his friends and in his classes at church. Adults love him, girls love him (he's nice to any girl that isn't friends with his sister), and his family thinks he's pretty great too. He can bring me to my highest high of the day- when I hear "love you" before he leaves for a camp-out, "thanks for ironing my shirt", or "bye mom" (it's rare and I think it's because he forgets who he is saying bye too, but I pretend he meant it for me). Aaron often tells me the appreciation will come later in life. I am just glad that I get to be a part of his great, sometimes funny, and often noisy, teenage life.

Maddy. We often get called each others names, and for those people that don't know our story, they think it's "funny" that we would name our daughter "Maddy" when my name is "Mandee". The first time I met her, I caught her staring at me... all night long. She is a funny girl, and a fun girl. And so easy going. If she has ever had an issue with having me as her stepmom, I have never known about it. She rarely has issues with anything, unless it's food. I once put the cheese for nachos in a bowl instead of on the chips themselves, and that sent her into a frenzy. And I won't even begin to talk about green beans. But she has always been a fun "little buddy" who loves to run to the store with me, share shoes, some clothing, and fun jewelry. She is the only "daughter" I will ever have, so I hope she doesn't mind the extra attention she gets from me.

Being a stepmom is the hardest thing I have ever been in my life. It's very, very different from being a "mom". At the beginning, when I was struggling with boundaries and my role in their life, Aaron said I should just feel like I am a babysitter. I am there to make sure they are okay, but I don't have to discipline, or worry about "problems". He meant for that piece of advice to make me feel more at ease. I was offended. And I've come to learn that I am more than a babysitter to my step-kids. (And I hate the word "step", by the way.) I worry about their safety, their health, their grades, their experiences, their happiness, their security, their difficulties, their trials, their disappointments, their talents, their goals, their comfort, their achievements, their wants, their needs- I worry about all of the same things for them that I worry about with the children that I gave birth to. But with Parker and Maddy, I have limits as to how much I can, and should worry about those things with them. I have limits in what I can say to them. I have boundaries all over the place in regard to how I "mother" them. And when I cross the line, it feels awkward in every way. Sometimes, it's a tense awkward. Sometimes it's a nice awkward. But, no matter what the boundaries or limits are, or how they change, I will always love them- unconditionally.

rabidrunner said…
Can you elaborate on the term "nice awkward" (wow even typing it kind of defines it)? I think that term describes my entire life...
2/12/07, 5:31 PM

Rachie said…
Mandee, I think you are the most wonderful person. I think you have taken those kids under wings like no other person could. They are so lucky to have you. I even teared up reading your posting. I would want you to be my kid's (step) mom. You are that GREAT!
2/13/07, 9:40 AM

Alifinale said…
I can't imagine how hard that would be. I only know my experience from being a "step" daughter and I know my relationship with all my steps has had many ups and downs (but so has it been with my "bio" parents). But in the end - I feel so lucky to have so many people care about me and want to be a part of my life. I am sure Maddy and Parker will feel the same and they are so lucky to have you!!
2/13/07, 4:31 PM

Likely said…
I would have been upset at the term babysitter as well. I am glad you take the initiative to be more than that to these adorable kids.

Aimee said…
Parker and Maddy are so completely lucky to have you. I can never thank you enough for stepping in and doing all that you do. You are a wonderful mom, and a fantastic sister-in-law and friend.
2/14/07, 6:24 PM

Anonymous said…
So now that the tears have stopped maybe I can tell you how I feel.
Thank you for being Parker's and Maddy's mother. They have been so blessed to have you in their lives. I know how much you love them and I have witnessed times when it would have been easier if you didn't. But thank you for understanding their situation and loving them anyway.
I know Aaron's comment was said to put you at ease but you aren't the babysitter. How could you help but get involved in their lives. You love them and want them to succeed and be happy. I can't say it enough. Thank you. Thank you. Thank you.
And, I know that you think when Parker calls you "Mom" it's a slip of the tongue ~ I'm not so sure about that. I think it's sincerely how he feels.
You and Aaron are great parents to all "5 is enough" children.
I love you.
2/14/07, 7:26 PM

Mandee said…
I really wasn't fishing for complements, but thanks for making me feel good about something that I feel like I am failing at so much of the time. And I have to defend Aaron against my own comment (this would fall under the "nice awkward" feeling... he really meant for the babysitter suggestion to make me feel like I wasn't carrying such a large part of the "parenting burden". His suggestion came during a time when I had to change my work schedule to accomodate the kids schedule and a change in custody... so, he really was just trying to offer some good advice.
2/14/07, 11:41 PM

Layton Clan said…
I just ran into your blog randomly, and found this post. How very wonderful it is to meet a fellow step-mom. It really is a struggle at times to just make it through when being a step-parent doesnt' give you the rights and the opportunities that you deserve as a parent. I am learning slowly the opportunities afforded me through this blessing (and sometimes trial!) thank you for your comments! Jen
3/15/07, 1:58 PM

Anonymous said…
Wow Mandee, I totally felt the same way when Justin told me the same thing about Eric. Its a hard job to be the "step" parent. From what I've seen and heard you do a great job and have lots of great info you could share with others (like me). You are someone I can learn lots from!
8/14/07, 1:13 PM

Aaron and I joke every time we are in that store that it smells like a fart. But it's really not very funny, because it does smell like someone tooted. In every Walmart I've been in, I've smelled someone's stink. It makes me want to puke. But I go back because it's cheap- I am always able to get all of my groceries and then some for around $100. And I can also grab some fabric, tires, and plants for my yard while I'm grocery shopping.

Saturday night, Maddy and I made a late night dash to Walmart. I needed groceries, and she needed some material to make a pillow in one of her classes at school. The first thing I went to put in my shopping cart was french bread. No french bread. None. Anywhere. I didn't even necessarily need the fresh stuff. I would've taken the stuff in the plastic bag with the twist tie, but they didn't even have that. Second on my list- tator tots. (I've heard from a million people that a ce…
16 comments
Read more