February 02, 2007
All of these picture were taken the same day. I sat Jack down on the couch next to Maxwell, and Charlie climbed up next to them. I was lucky not to let this moment pass, as I sometimes do. I grabbed the camera to take what I thought would be some pictures that I would eventually stick in their scrapbook. But they turned out to be much more to me. Jack was starting to fuss and Max grabbed the train trying to entertain him. I kept telling him to put the train down (so I could see Jack's face) but it was too important for him to keep Jack happy.

In order of appearance; Charlie's first official day of potty training, enjoying a reward for peeping on the potty; Jack, 6 months old; and my three musketeers, totally enamored with Percy from the Thomas the Train collection. 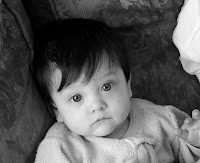 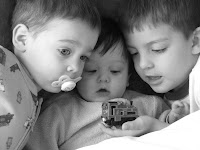 Neva said…
I LOVE THESE PHOTOS, I'm so happy you found time to stop and smell the roses, take pictures and enjoy your little boys, they will be big and gone before you know it, "sob. sob"
2/8/07, 4:43 PM